Carlos Ágreda, a Conducting Fellow at the Curtis Institute of Music, Appointed to Position 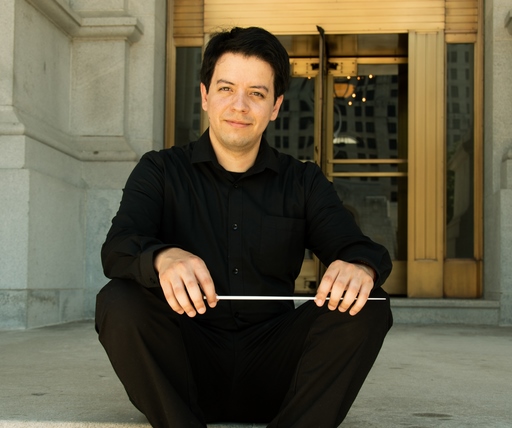 (Schenectady, NY) – The Empire State Youth Orchestra board of directors has announced the hiring of a new music director after an extensive global search. Members of the board appointed Carlos Ágreda to the position. He will come to the Capital Region in early June and take over for Music Director Helen Cha-Pyo as she closes out the season after 16 years with the organization.

Abbe Kovacik, who serves as chair of the board, explained that the year-long search was incredibly thorough. Ágreda emerged from a pool of over 70 highly qualified candidates as the clear choice. “Mr. Ágreda is simply an amazing musician.  He has talent and technique.  We were impressed by the fluency, brightness and energy of this exceptional candidate. His conducting demonstrates flexibility and expressiveness.  He is thoughtful and humble; insightful beyond his years.  He is affable and engaging. During his audition he clearly connected with the youth. Mr. Ágreda has limitless potential and talent, and combined with his already considerable experience, he was clearly the ideal choice,” said Kovacik.

Ágreda, who is originally from Colombia, has worked with a variety of orchestras, including the Royal Liverpool Philharmonic Orchestra, the Manchester Camerata, the Curtis Symphony Orchestra, the BBC Philharmonic, the Colombia National Symphony Orchestra and the Liverpool Mozart Orchestra. He most recently was a conducting fellow at Curtis Institute of Music, one of the finest conservatories in the world. Ágreda is thrilled to come to the Capital Region to serve as ESYO’s music director and conductor of the Youth Orchestra. “I am passionate about symphonic music and its power to make society better. I am very excited and honored to take on this responsibility of serving the region through music education. ESYO has a particularly important role because our young musicians are not only future audience members in the area, they are also building our future society and broadening the perception of quality in the arts,” he said.

Carlos Ágreda received international attention at the age of 22 when he reached the 3rd round in the Cadaqués Orchestra International Conducting Competition 2013, being the youngest and one of the final candidates. He won the competition for young Colombian conductors to conduct the Colombia National Symphony Orchestra in its 2014 season, while he served as music director of the Orchestral Corporation of Colombia.

He has a wide variety of musical interests and repertoire that range from opera to contemporary to Latin-American music. His approach to new music has been cultivated by conducting more than 30 world premieres in the United States, Colombia and the United Kingdom. In the Capital Region both ESYO and the Albany Symphony Orchestra are nationally recognized leaders in the category of new music.

Executive Director Becky Calos believes she will be able to accomplish a lot in partnership with Ágreda and the board of directors. “I am so delighted to welcome ESYO’s first, full-time resident music director and Youth Orchestra conductor. Mr. Ágreda elicited such enthusiasm across all constituencies during his visit: students, board members, parents, teachers, alumni and supporters alike were universally excited to invite Mr. Ágreda to be part of the ESYO family. I look forward to introducing him to the broader community, and letting everyone share in his incredible passion for music making.”

The ESYO search committee included student musicians who participate in the program. They had many positive things to say about their new leader. Here is a sample of their comments: “Mr. Ágreda was very approachable, capturing and understanding of what we needed to work on in rehearsal during our time together. He was very energetic and relatable, allowing us to fully identify what he was looking for us to work on in rehearsal. He explained concepts in a way that made sense and allowed us to actually apply them to the music we were reviewing and work to improve how we approached the issues we faced as an orchestra. Mr. Ágreda seems very open to various musical genres and tastes, and I think this is something that is incredibly important when working with a director, because it is essential that we have the ability to work on a wide variety of works.”

There is a lot of excitement surrounding the appointment of Ágreda. “He will be extremely motivational to not only the young musicians, but the institution as a whole,” said Kovacik.

About Empire State Youth Orchestra:  Empire State Youth Orchestra (ESYO) challenges and inspires young people to achieve excellence through music in a rigorous learning environment leading to high-level performance opportunities. More than 500 youth from the Capital Region of New York and western New England are selected by audition each year for the ESYO program. ESYO has a total of 10 performing ensembles that collectively give approximately 30 performances a year. In 2015, ESYO launched ESYO CHIME (Creating Harmony, Inspiring Musical Excellence). ESYO CHIME seeks to expand access to music in underserved communities, and by doing so, empower children and their families to overcome the barriers to musical excellence caused by economic inequality. Founded in 1979, ESYO is a not-for-profit organization that has been recognized as a premier music education/performance program for youth and has received three ASCAP awards. For more information, visit esyo.org.

About Carlos Ágreda:  Prior to joining ESYO, Carlos Ágreda was the Conducting Fellow at the Curtis Institute of Music where he was mentored by Yannick Nézet-Séguin. Carlos has served as Assistant Conductor of the BBC Philharmonic, assisting conductors including Juanjo Mena, Jac Van Steen, Yan Pascal Tortelier, Jon Storgards, and Jesús López-Cobos. Carlos served as Assistant Conductor under Vasily Petrenko with the Royal Liverpool Philharmonic, and Sir Mark Elder with the Hallé Orchestra. In the United States, Carlos has been assistant/cover conductor for the Saint Louis Symphony and the Pittsburgh Symphony, working with conductors such as David Robertson and Nicholas McGeegan. In addition to these assistantships, Carlos has worked professionally with different conductors such as Sir Andrew Davis, Miguel Harth-Bedoya, and Osmo Vänskä.​

Born in Bogotá, Colombia, Carlos gained international attention at the age of 22 when he reached the 3rd round in the Cadaqués Orchestra International Conducting Competition 2013, being the youngest and one of the last seven short-listed candidates. Carlos won the competition for young Colombian conductors to conduct the Colombia National Symphony Orchestra in its 2014 season, while he was the Music Director of the Orchestral Corporation of Colombia. Carlos has worked with different orchestras in Colombia, the United Kingdom and the United States, including the Royal Liverpool Philharmonic Orchestra, the Manchester Camerata, the Curtis Symphony Orchestra, the BBC Philharmonic, the Colombia National Symphony Orchestra, the Liverpool Mozart Orchestra, among many others.

Passionate about excellence and versatility, his musical interests and repertoire range from opera and choral music to contemporary and Latin-American music. For instance, his approach to new music has been widely developed by conducting more than 30 world premieres in the United States, Colombia and the United Kingdom. In accordance with this interest, Carlos conducted chamber pieces by British composer Jonathan Harvey in the prestigious Wigmore Hall (London), he conducted in the major festival New Music North West 2016, and conducted full-staged opera productions at the Opera Philadelphia and Curtis Opera Theater (USA).  Carlos was invited to lead the Conducting Workshop at the Huddersfield Contemporary Music Festival 2016 (UK) and was recently invited as a Conducting Fellow to the Cabrillo Contemporary Music Festival 2017 (USA).​

Carlos is passionate about social transformation through art and community education. This commitment has lead him to work with programs such as Play On Philly (Philadelphia, USA), All City Orchestra (Philadelphia), the Stockport Youth Orchestra (UK) and the Unimusica Youth Orchestra (Colombia). In Colombia, Carlos was the Artistic Director of one of the projects of Social Transformation Through Music by the Bogota City Hall in collaboration with the Bogota Philharmonic

Contact: Susan Bardack – 518.867.7940/This email address is being protected from spambots. You need JavaScript enabled to view it.