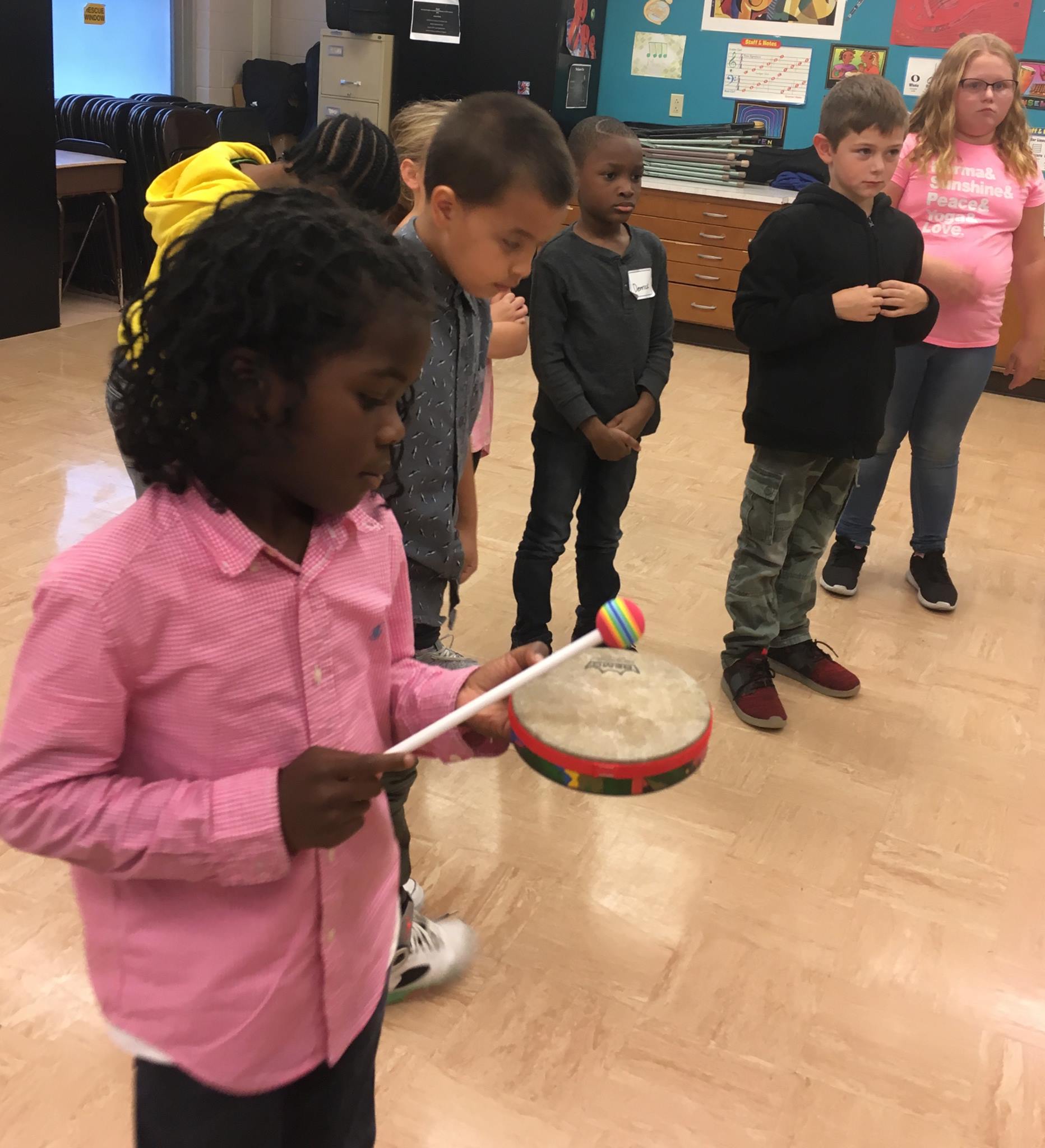 Elizabeth Swift, who is a musician, music educator and an alumna of ESYO, was chosen to head up the program that was launched only a few weeks ago. She serves as the CHIME program manager and Troy Site Leader. The program in Troy currently serves first through third grade students at the school. They are starting with 20 students in a strings program who will practice two hours a day, five days a week, during the school year. The curriculum includes a general music component, small group breakouts and a full class ensemble.

“ESYO CHIME has an amazing philosophy, ‘breaking down barriers and providing equal access to music instruction.’ This provides an opportunity to change lives in a transformative way. As a teacher and as mentor, I witness improvements in students daily through their musical accomplishments. Their achievements are shared with families, siblings, teachers and members of communities,” said Swift.

Becky Calos, who serves as executive director of ESYO and who worked to create the CHIME program, is thrilled to take this next step of expansion. “Since the inception of CHIME, it has always been a goal to have a program in the Troy City School District. This has become a reality thanks to many talented and passionate educators who are dedicating their lives to inspiring student musicians. We look forward to working hard both in Troy and Schenectady this year while continuing to explore additional regions for a CHIME expansion in the near future,” said Calos.

The Troy City School District is able to offer CHIME thanks to the Empire State After School Program that is funded through a grant. Each of the five elementary schools host their own after school program, resulting in additional learning time for students in Grades K-5. The program is staffed by school district staff as well those involved with partner organizations including the Troy YMCA and the Troy Boys and Girls Club. They provide academic support, mindfulness and enrichment activities. “Troy CHIME is a wonderful enhancement to an already robust program. I am excited that by having CHIME in Troy, it means that many of these students will have additional opportunities for focused immersion in string instruction on a daily basis. I am hopeful that these students will choose to pursue music throughout high school and beyond. Troy CHIME provides students with artistic and creative opportunities as well as the opportunity to be exposed to classical music, which is shown to improve math, ELA and interpersonal skills,” said Hilary Montesano who serves as grant facilitator.
Swift said they have some specific goals in regards to the program this school year. “Most importantly, we’d like the students to perform as much as possible. We’d like to collaborate with some of the Schenectady CHIME locations to put on monthly concerts and host a few additional formal performances.”

Kayleigh Retell is a parent of a second grade student who is part of Troy CHIME. “I am excited about my daughter having a fun activity after school while also learning something new. Madison saw some kids from CHIME play at her open house. She literally jumped up and down in excitement and begged me to sign her up. She’s always wanted to play an instrument. I am also excited about her being able to put her mind to something to create her own success,” she said.

As far as future goals of the program, the team, which recently welcomed Carlos Ágreda as its new Music Director, would like to serve more students at additional Troy schools. Ágreda is impressed with how successful CHIME has proven to be, and is eager to apply his own experience with Sistema-inspired programs to helping Troy CHIME to grow. The team plans to offer additional instrument choices in the future. This would allow the Troy program to become similar to Schenectady CHIME where instruction is offered to students at several schools and those musicians are able to come together, in one location, for a full symphonic experience.

As far as future goals of the program, the team would like to serve more students at additional Troy schools. They’d also like to offer additional instrument choices. This would allow the Troy program to become similar to Schenectady CHIME where instruction is offered to students at several schools and those musicians are able to come together, in one location, for a full symphonic experience.

CHIME is so much more than a traditional music education program according to Swift. “CHIME is a place where we can really encourage a growth mindset, an environment to entertain ‘possibilities’ and the power of ‘not yet, but you will.’ We have the opportunity to teach the students that hard work and dedication to a task will lead to a more fulfilling life. Music is not a material object to be taken away. Once learned, it is yours forever.”

About Empire State Youth Orchestra: Empire State Youth Orchestra (ESYO) challenges and inspires young people to achieve excellence through music in a rigorous learning environment leading to high-level performance opportunities. More than 500 youth from the Capital Region of New York and western New England are selected by audition each year for the ESYO program. ESYO has a total of 10 performing ensembles that collectively give approximately 30 performances a year. In 2015, ESYO launched ESYO CHIME (Creating Harmony, Inspiring Musical Excellence). ESYO CHIME seeks to expand access to music in underserved communities, and by doing so, empower children and their families to overcome the barriers to musical excellence caused by economic inequality. Founded in 1979, ESYO is a not-for-profit organization that has been recognized as a premier music education/performance program for youth and has received three ASCAP awards. For more information, visit esyo.org.

About Carlos Ágreda: Prior to joining ESYO, Carlos Ágreda was the Conducting Fellow at the Curtis Institute of Music where he was mentored by Yannick Nézet-Séguin. Carlos has served as Assistant Conductor of the BBC Philharmonic, assisting conductors including Juanjo Mena, Jac Van Steen, Yan Pascal Tortelier, Jon Storgards, and Jesús López-Cobos. Carlos served as Assistant Conductor under Vasily Petrenko with the Royal Liverpool Philharmonic, and Sir Mark Elder with the Hallé Orchestra. In the United States, Carlos has been assistant/cover conductor for the Saint Louis Symphony and the Pittsburgh Symphony, working with conductors such as David Robertson and Nicholas McGeegan. In addition to these assistantships, Carlos has worked professionally with different conductors such as Sir Andrew Davis, Miguel Harth-Bedoya, and Osmo Vänskä.

Born in Bogotá, Colombia, Carlos gained international attention at the age of 22 when he reached the 3rd round in the Cadaqués Orchestra International Conducting Competition 2013, being the youngest and one of the last seven short-listed candidates. Carlos won the competition for young Colombian conductors to conduct the Colombia National Symphony Orchestra in its 2014 season, while he was the Music Director of the Orchestral Corporation of Colombia. Carlos has worked with different orchestras in Colombia, the United Kingdom and the United States, including the Royal Liverpool Philharmonic Orchestra, the Manchester Camerata, the Curtis Symphony Orchestra, the BBC Philharmonic, the Colombia National Symphony Orchestra, the Liverpool Mozart Orchestra, among many others.

Passionate about excellence and versatility, his musical interests and repertoire range from opera and choral music to contemporary and Latin-American music. For instance, his approach to new music has been widely developed by conducting more than 30 world premieres in the United States, Colombia and the United Kingdom. In accordance with this interest, Carlos conducted chamber pieces by British composer Jonathan Harvey in the prestigious Wigmore Hall (London), he conducted in the major festival New Music North West 2016, and conducted full-staged opera productions at the Opera Philadelphia and Curtis Opera Theater (USA). Carlos was invited to lead the Conducting Workshop at the Huddersfield Contemporary Music Festival 2016 (UK) and was recently invited as a Conducting Fellow to the Cabrillo Contemporary Music Festival 2017 (USA).

Carlos is passionate about social transformation through art and community education. This commitment has lead him to work with programs such as Play On Philly (Philadelphia, USA), All City Orchestra (Philadelphia), the Stockport Youth Orchestra (UK) and the Unimusica Youth Orchestra (Colombia). In Colombia, Carlos was the Artistic Director of one of the projects of Social Transformation Through Music by the Bogota City Hall in collaboration with the Bogota Philharmonic

Contact: Susan Bardack 518.867.7940/This email address is being protected from spambots. You need JavaScript enabled to view it.