ESYO Announces 2019-2020 Concert Season that Includes a 40th Birthday Celebration, a Performance with a Cellist in the Chicago Symphony Orchestra and a Tour to South America 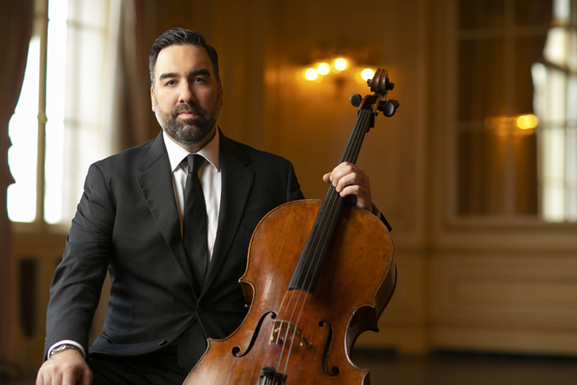 ESYO Announces 2019-2020 Concert Season that Includes a 40th Birthday Celebration, a Performance with a Cellist in the Chicago Symphony Orchestra and a Tour to South America

(Capital Region) – The Empire State Youth Orchestra has announced the 2019-2020 season which includes a 40th birthday celebration for the organization, a concert with an ESYO alumnus who is assistant principal cellist for the Chicago Symphony Orchestra and a tour to South America.  The organization is comprised of 13 performing ensembles and the successful CHIME (Creating Harmony Inspiring Musical Excellence) program.

Music Director Carlos Ágreda is already in rehearsals with ESYO’s Symphony Orchestra on their upcoming concert on Saturday, November 2, 2019 at the Troy Savings Bank Music Hall. The concert opens with the Festive Overture by Dmitri Shostakovich. The Cello Concerto in E minor, Op. 85 by Edward Elgar will follow. The Elgar concerto will be performed by ESYO alumnus, Kenneth Olsen. Olsen is currently assistant principal cellist in the Chicago Symphony Orchestra but performed with ESYO in the 1990’s. He grew up in Colonie. The second portion of the concert will feature Die Fledermaus Overature by Johann Strauss II and Pines of Rome by Ottorino Respighi. The Times Union the sponsor of the November concert.

“This upcoming season is particularly exciting. We have the celebration of our 40th Anniversary and also the appearance of an amazing soloist, who once played in ESYO. We are also going on an international tour to Argentina and Uruguay. But, on top of that, we are working on our new partnership with the Troy Savings Bank Music Hall that will bring a greater value to arts in the Capital Region,” said Ágreda.

ESYO has had a tradition of touring outside the country for over 30 years and they are excited to go to South America for the first time in their history. The Symphony Orchestra, ESYO’s top level full-orchestra, is going to Argentina and Uruguay next summer and will be performing music by Heitor Villa-Lobos (Brazil), Leonard Bernstein (USA), living composer Esteban Benzecry (Argentina), and Johannes Brahms (Germany). Villa-Lobos and Brahms had an inner interest for "musical universality" and with this program the student musicians will be presenting music from both North and South America. It is a celebration of this common idea of Villa-Lobos and Brahms where music is a language without borders that unifies humanity.

Throughout the 2019-2020 season Ágreda has a goal for all ensembles. “Beyond the artistic growth of our young musicians and providing meaningful musical experiences to them, we have a general goal for this season: artistic unity. ESYO is an organization that has grown very much over recent years and now consists of over a dozen performing ensembles plus CHIME.”

In addition to these many concert experiences, Rebecca Calos who serves as ESYO’s executive director, is focusing on the big picture.  The organization recently announced a new partnership with the Troy Savings Bank Music Hall Corporation to create AMPT--Alliance for Music Performance in Troy. AMPT was developed to explore the use of the recently acquired vacant floors of the Troy Savings Bank building by the Troy Music Hall Corporation. AMPT will enable its partners to maximize their impact through shared resources, and to realize a broader vision to offer enhanced music and performance opportunities to the community. “I am thrilled to work on this incredible new partnership that I believe will enrich the musical arts in our region. Our 2019-2020 season is truly one of celebration and we are hoping to share that here in the Capital Region and also with the world while on tour. We are deeply committed to providing educational experiences that our student musicians will take with them for the rest of their lives,” said Calos.

For concert attendance, Access ESYO will be used once again. ESYO received a $30,000 American Orchestras’ Futures Fund grant from the League of American Orchestras in 2018, made possible with the generous support of the Ann & Gordon Getty Foundation. The League’s Futures Fund supported the launch of Access ESYO, an online, “pay what you can” ticketing program developed in response to the needs of an increasingly economically diverse membership. Access ESYO allows ticket purchase for as little as $1.00 per seat, and will be sustained through a pay-it-forward campaign inviting donors to deposit the cost of a seat in an online ticket bank. ESYO has never turned away a qualified musician due to economic hardship, and is now taking steps to ensure that no audience member is denied access because of the price of a ticket.

ESYO will also participate this season in two national music cohorts: Presto Sistema USA, and Carnegie Hall’s Weill Music Institute PlayUSA. ESYO was invited in 2018 to join Presto to support its expansion of the CHIME program. This past spring, Carnegie Hall’s Weill Music Institute announced ESYO as a grant recipient for their program that supports a wide range of instrumental music education projects across the United States, all specifically designed to reach low-income and underserved students on a local level. "ESYO is thrilled and honored to members of both of these national cohorts. We know we will gain tremendously from the professional development opportunities this partnership will afford, the connections we will make with other music organizations across the country, and the resources that it will provide," said Calos.