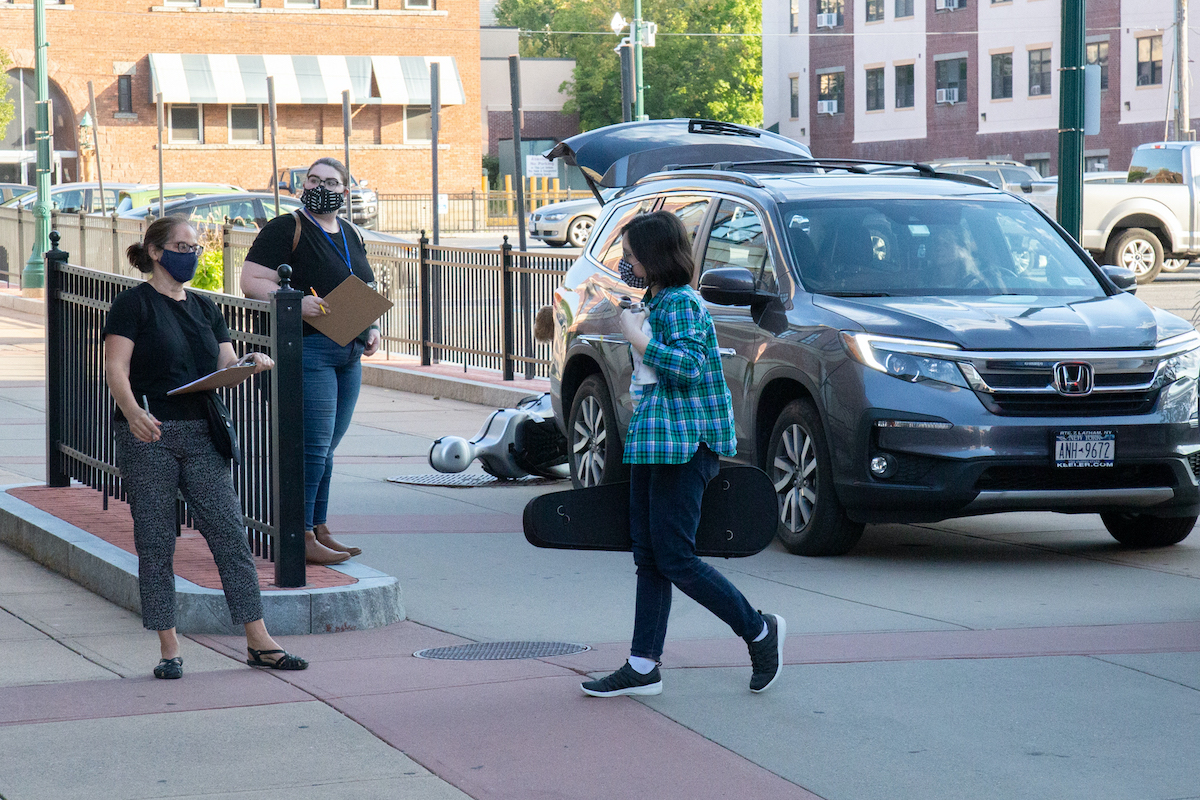 Schenectady, NY- The Empire State Youth Orchestra, known regionally and nationally for nourishing young musicians from communities in New York's Capital Region and Western Massachusetts, announced that its 13 ensembles, including its flagship Symphony Orchestra and el-Sistema- inspired CHIME program, have resumed in-person rehearsals and meet-ups for the first time since the start of the COVID-19 pandemic. Ensemble rehearsals, which began mid-September, are held weekly in a safe-studio environment at Proctors in Schenectady. CHIME, ESYO's after school program, which suffered a setback after losing critical funds from a regrant partnership between the New York State Department of Education and Schenectady City Schools, is to begin online this fall and include several in-person "instrument hangs". All ESYO concerts are to be recorded LIVE on Proctors mainstage and streamed to virtual audiences through the orchestras virtual concert hall. 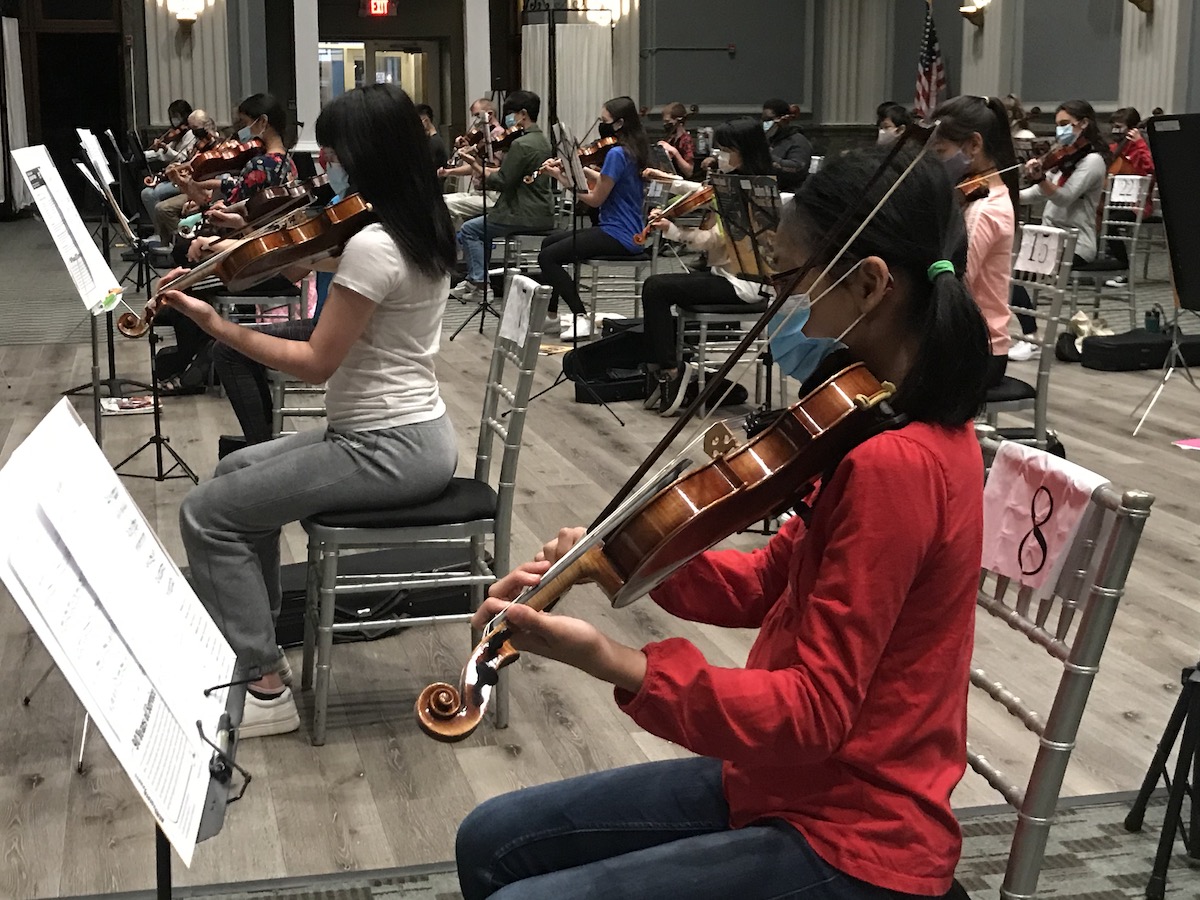 "While the essence of ESYO remains the same, this season will be different," said Rebecca Calos, the youth orchestras Executive Director. "We've taken all the necessary precautions to create a safe environment for joyful music-making and are continually working to adjust to life with COVID-19." she continued. "We are grateful for the opportunity to restart ESYO and provide an essential creative outlet for our young musicians." 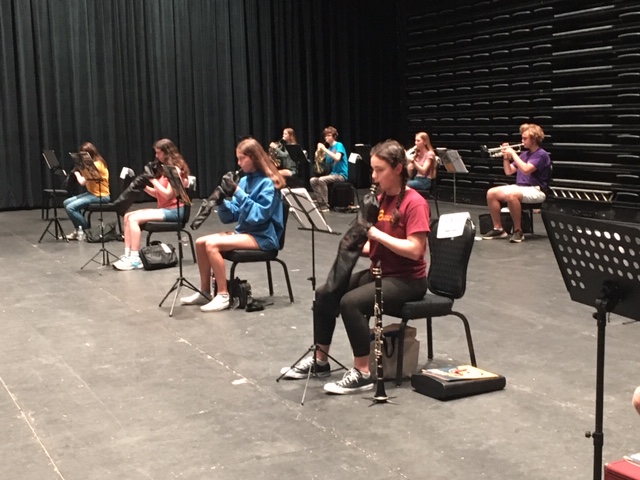 Safety is top of mind for ESYO faculty and staff. From inventive PPE for wind and brass instruments to smaller ensembles, socially distanced orchestra layouts, and new safety protocols, ESYO leveraged the experience of its faculty and board to create a restart plan that mitigates the risks and spread of COVID-19. Musicians, conductors, and staff are required to complete a health questionnaire before each rehearsal and must wear a CDC recommended mask.

"Finding a way to mask woodwind and brass players was not easy," said ESYO Music Director Carlos Ágreda. "After reading, researching, and testing different ways to contain the aerosols spread by a trumpet or oboe, we decided to work with a local seamstress to create custom PPE bags for woodwind instruments and bell covers for each trumpet and trombone," Ágreda continued. 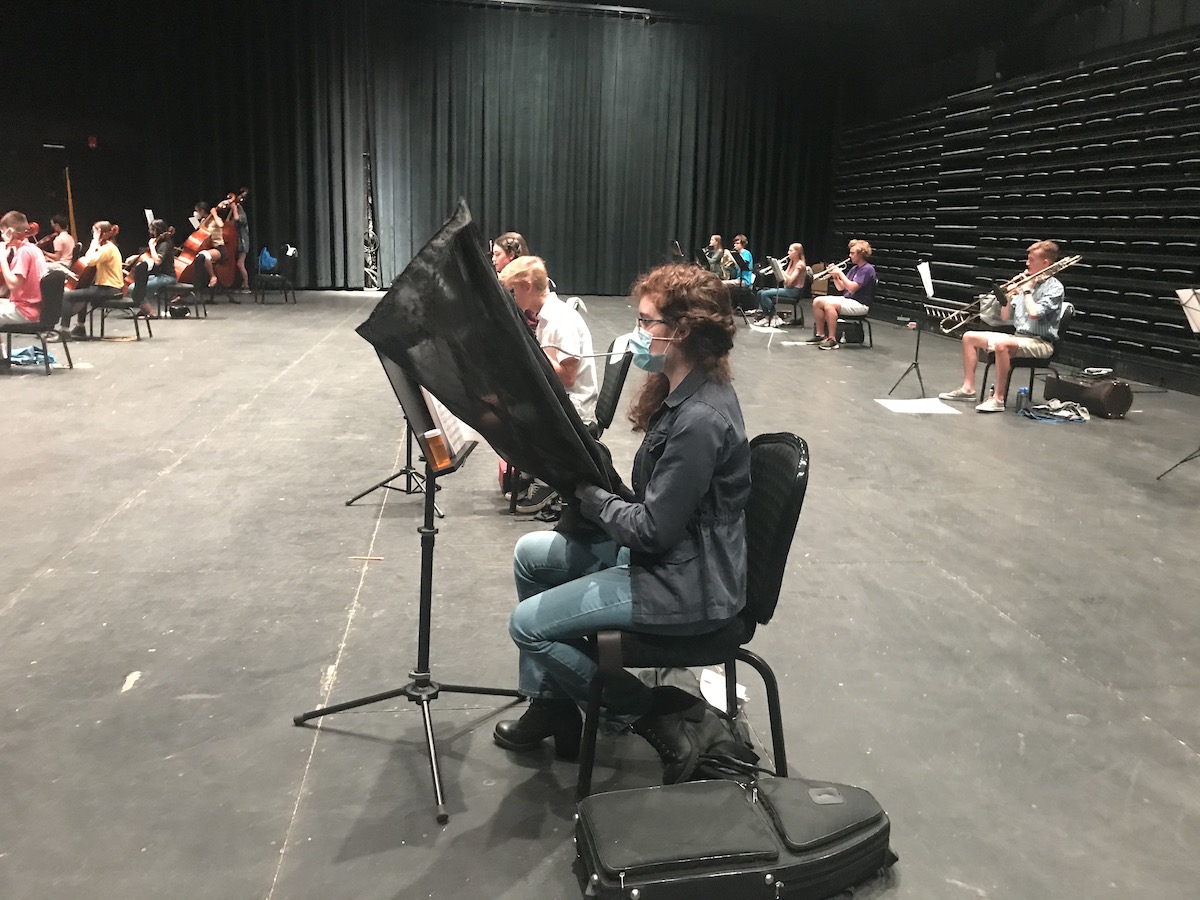 "The woodwind bags are particularly interesting," said Rebecca Calos. "The musician places their instrument in the bag and inserts their hands inside the bag through two elastic hand holes," she continued. "The aerosols produced by the musician are reduced within the bag and contained as much as possible."

ESYO's residency at Proctors also supports the return to live in-person rehearsals. In August, officials at Proctors installed MERV-13 filtration devices that properly circulate airflow while filtering aerosols from the rehearsal spaces. "Space is essential," said Ágreda. "We've reduced the size of each ensemble and divided our largest orchestras into smaller chamber ensembles of thirty young musicians. But, even with the smaller ensembles, we needed to find a space large enough to maintain 6ft of social distancing for strings and 12ft for winds and brass players," he continued.

When asked about ESYO's residency at Proctors, Proctors Collaborative CEO Phillip Morris said: "While Proctors must be closed for now for performances, our large spaces and updates and modern air handling has allowed us to work with ESYO to make safe spaces for students to still practice and rehearse music. We are happy our spaces can be used to make community and art come together." 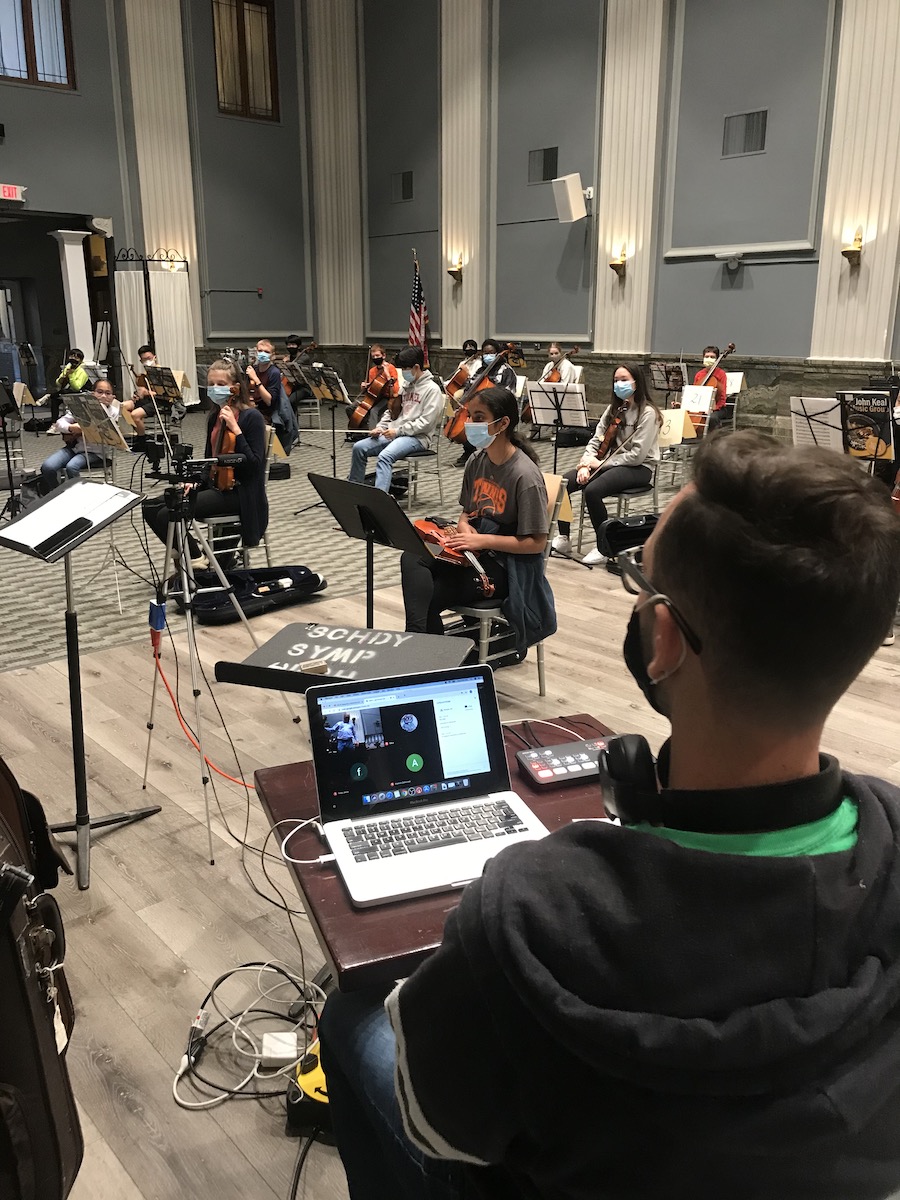 ESYO's restart is not without its challenges. The premier youth orchestra attracts members from all 12 counties of New York's Capital Region and neighboring communities in Western Massacuessets. "We've had to adust our attendance policy and how we rehearse," said Calos. "Rehearsal time is precious, and if a musician misses one rehearsal, it can set them back. That is why we created ESYO Stream," she continued.

Developed in partnership with video producer and ESYO Board Member Robert Bengraff, ESYO Stream enables the youth orchestra to stream rehearsals to musicians at home. "COVID-19 has tested our ability to use technology," said Music Director and Symphony Orchestra Conductor Carlos Ágreda. "We've had several members of Symphony Orchestra who've decided to attend rehearsals virtually because of the pandemic, and ESYO Stream has made that possible," he continued. To attend a rehearsal online, ESYO musicians log into their virtual rehearsal room and play along at home, and can record their progress and chat with their conductor online.

Despite the challenges, "ESYO continues sounding together," said Carlos Ágreda. "Our young musicians are passionate about making music, and this season premieres new opportunities." he continued. From timeless masterpieces by Mozart, Beethoven, Dvorak, and Tchaikovsky, to music composed by Music Director Carlos Ágreda, Jennifer Higdon, Kurt Weill, Victor Herbert, and Brazilian-American composer Clarice Assad, ESYO's smaller ensembles allow ESYO Symphony Orchestra to discover new and exciting repertoire. Most of the new music performed by ESYO's Symphony Orchestra is to feature living composers from backgrounds and experiences that are under-represented in the classical canon. In March, ESYO Symphony Orchestra is to perform William Grant Still's iconic symphonic conversation between classical and jazz, "Darker America." 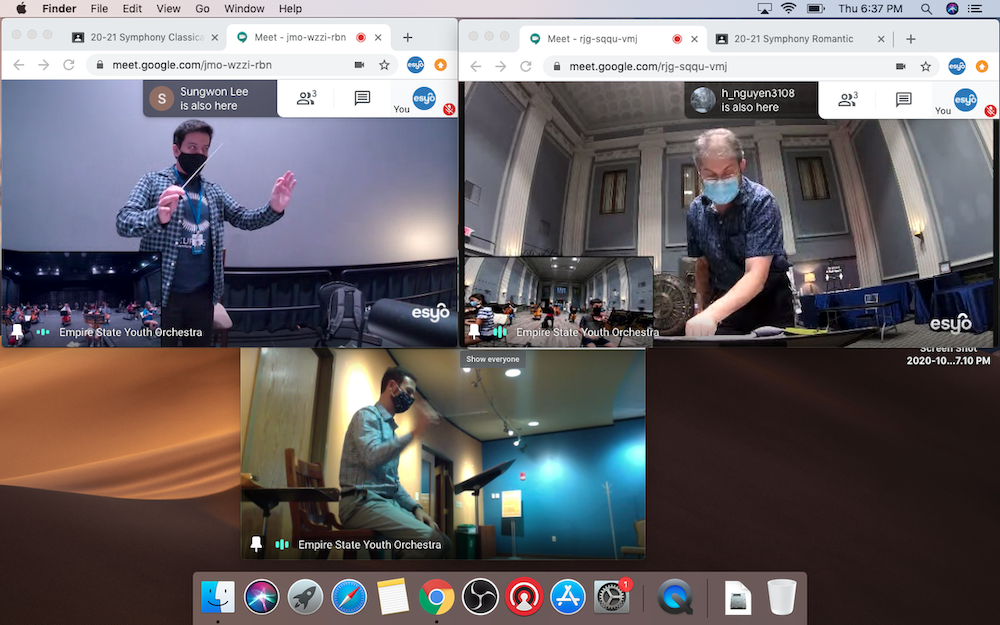 "ESYO Restart is exciting, but like all arts and cultural institutions, we are facing new financial challenges," said ESYO's Director of Development Anne-Marie Gorman-Doyle. "To make this work, ESYO needed to make some investments in technology and space. That is why, out of sheer necessity, we've started "passing the hat" to our friends and the community at large to help raise the additional $100,000 we need to maintain our safe-studio space at Proctors." To date, ESYO has raised $20,000 towards its $100,000 goal.

Friends, alumni, and neighbors can donate to ESYO's "Pass the Hat" campaign online by visiting ESYO.org/pass-the-hat. Companies and neighborhood businesses can best support ESYO Restart by becoming a corporate sponsor or program book underwriter. For more information about how your company or small business can become a sponsor or underwriter visit esyo.org/support.

The 2020-2021 season is made possible through the generous support of the Times Union.