The Helen Cha-Pyo Baton Award is presented each spring to a senior who embodies the passionate commitment of former Music Director, Helen Cha-Pyo, to music as a means to uplift and enrich the community. Ms. Cha-Pyo served as ESYO’s Music Director and Symphony Orchestra Conductor between 2002 and 2018. Under her extraordinary leadership, ESYO grew to become one of the preeminent Youth Orchestras in the nation. Helen’s vision guided the creation of ESYO CHIME in 2015, providing a free, comprehensive music program for our region’s youth, and expanding access to outstanding performance opportunities. Ms. Cha-Pyo’s active community engagement sparked numerous collaborative projects both regionally and internationally.

This season, ESYO is excited to announce not one, but TWO recipients of this award, as it was simply impossible for the committee to decide on just one. 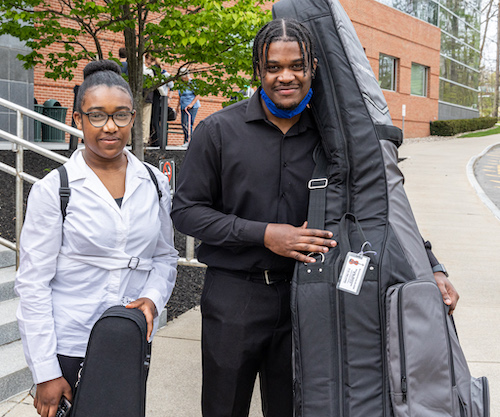 The first recipient is DeVaughn Miller. Those who have had the good fortune to work with DeVaughn as a Young Leader, a member of the CHIME orchestra, and Repertory Orchestra, could not help but be impressed by his reliability, his gentle energy, calm presence, and willingness to help out, no matter the challenge. In addition to lending his support to community outreach and serving on national, creative youth development panels, DeVaughn has also been a steady presence in Concertino strings, adding that powerful anchor to our youngest players, that only a bassist can provide. He has been a wonderful role model for our younger students, and they clearly look to him for guidance.

It has been a joy to watch DeVaughn grow as a musician and as a leader, and we wish him all the best as he heads out into the world. Congratulations, DeVaughn!

And our second recipient of this award is Georgia Burtt. Like Helen Cha-Pyo, Georgia truly reflects the “serious fun” of music-making. Georgia has really embodied what it means to be a musician-citizen this year. She is warm and welcoming with everyone she encounters, and consistently takes that extra step to do all she can to use music to benefit her community. We honor Georgia for her countless volunteer hours, her dedication to service, as well as her outstanding musicianship. Helen often referred to the Bantu term, Ubuntu, in describing her philosophy on music making: Ubuntu is often translated as “I am because we are,” or “humanity toward others.” Helen believed that through sharing one’s music with others, we create meaningful connections and enrich humanity. With this award, we honor Georgia for her ability to do just as Helen advocated: create meaningful connections with others through her generous gift of music. We wish Georgia all the best in her future endeavors, and hope that she will keep ESYO up to date on all of her adventures. Congratulations, Georgia!