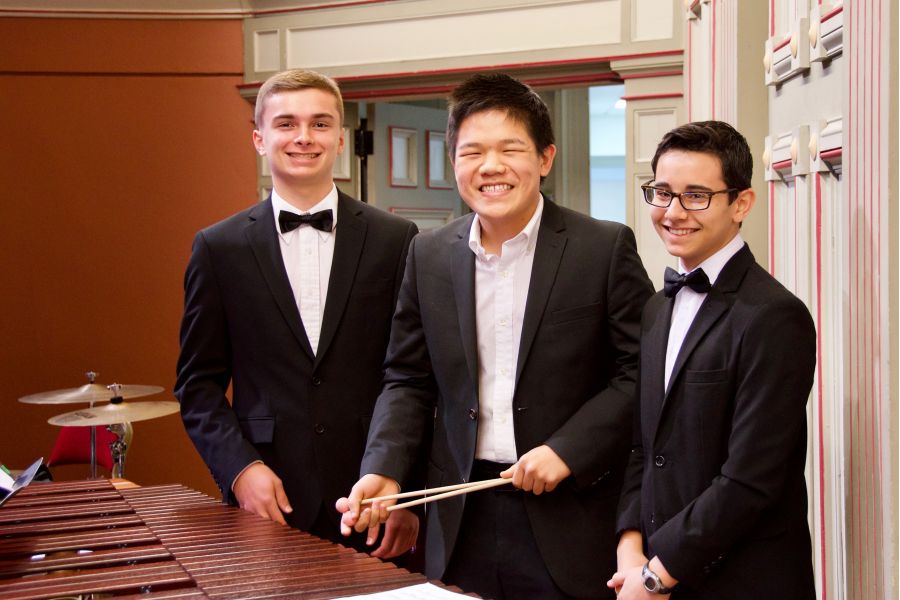 (Schenectady, NY) – The Empire State Youth Orchestra has announced the 2018-2019 season which celebrates 40 years of the organization and the hiring of Carlos Ágreda, the new music director and conductor of the Youth Orchestra. The organization is comprised of 10 performing ensembles that collectively play over 30 concerts each year.

This past spring the ESYO board of directors announced the hiring of Ágreda after an extensive national search. Ágreda, who is originally from Colombia, has worked with many orchestras in different countries. They include: The Royal Liverpool Philharmonic Orchestra, the Manchester Camerata, the Curtis Symphony Orchestra, the BBC Philharmonic, the Colombia National Symphony Orchestra and the Liverpool Mozart Orchestra. He most recently was a conducting fellow at Curtis Institute of Music, one of the finest conservatories in the world.

Ágreda is most looking forward to getting to know the student musicians. “I am very excited to be part of their individual development over this next season while together we share a passion for music,” he said.

He has already programmed both the November and April Youth Orchestra concerts. The fall concert, in November, includes: Capriccio Espagnol (Rimsky-Korsakov), Sensemayá (Silvestre Revueltas), Overture to the Barber of Seville (Rossini) and Symphony No. 9 (New World – Dvorak). The spring concert in April includes: Symphony No. 4 (Tchaikovsky) and the piece the Lois Lyman Concerto Competition winner will perform (TBD).

“The artistic development of the orchestra both collectively and individually is the most important parameter for me to consider when programming a season. Having this in mind, I chose pieces that will challenge sections of the orchestra in a way where the musicians can look at their role in the symphonic music from different perspectives and develop their skills accordingly,” Ágreda said.

The new music director is already starting to get ready for the November concert. “The first concert is a celebration of the diversity of the ‘New World.’ We will perform two pieces that celebrate the culture and stories from Spain; Rimsky-Korsakov’s ‘Capriccio Espagnol’ and Rossini's ‘Overture to the Barber of Seville.’ These traditions and dances traveled together with the Spaniards to the American continent and provoked a huge and beautiful mixture of cultures. As an example of this, ‘Sensemayá,’ by Mexican composer Silvestre Revueltas, is a composition that depicts rituals of Afro-Cuban cultures, and its mixture with African and European spiritual ideas. Dvorak was fascinated by the many cultures when he came to New York.  He was also impressed by the similarities between Native-American and African-American music. This inspired his Symphony No. 9 ‘New World’ which celebrates the beauty and homogeneity of American diversity,” he said.

Executive Director Becky Calos is thrilled to have Ágreda on board. "We are so excited to see ESYO's first, full-time resident music director and Youth Orchestra conductor in action. When he visited and conducted our Youth Orchestra he immediately connected with the musicians and inspired them in one session beyond anything we could have imagined. We can’t wait to see how he’ll excite both them and our audience members over this next season,” she said.

Also new this season will be an initiative called Access ESYO. Last spring ESYO was one of 17 orchestras that received a $30,000 American Orchestras’ Futures Fund grant from the League of American Orchestras, made possible with the generous support of the Ann & Gordon Getty Foundation. The League’s Futures Fund supports the launch of Access ESYO, an online, “pay what you can” ticketing program developed in response to the needs of an increasingly economically diverse membership. Access ESYO allows ticket purchase for as little as $1.00 per seat, and will be sustained through a pay-it-forward campaign inviting donors to deposit the cost of a seat in an online ticket bank. ESYO has never turned away a qualified musician due to economic hardship, and is now taking steps to ensure that no audience member is denied access because of the price of a ticket.

Ágreda hopes the ESYO students reach new goals this season. “I envision our young musicians accomplishing individual and collective world-class musical achievements. I hope their experience at ESYO is part of their development as human beings so the ESYO name is recognized not only for outstanding artistry but also for its impact on students as citizens of today's world,” he said.

The 10 ensembles that make up ESYO will perform at a wide variety of venues throughout the Capital Region including the Troy Savings Bank Music Hall and Proctors.

About Empire State Youth Orchestra:  Empire State Youth Orchestra (ESYO) challenges and inspires young people to achieve excellence through music in a rigorous learning environment leading to high-level performance opportunities. More than 500 youth from the Capital Region of New York and western New England are selected by audition each year for the ESYO program. ESYO has a total of 10 performing ensembles that collectively give approximately 30 performances a year. In 2015, ESYO launched ESYO CHIME (Creating Harmony, Inspiring Musical Excellence). ESYO CHIME seeks to expand access to music in underserved communities, and by doing so, empower children and their families to overcome the barriers to musical excellence caused by economic inequality. Founded in 1979, ESYO is a not-for-profit organization that has been recognized as a premier music education/performance program for youth and has received three ASCAP awards. For more information, visit esyo.org.

Contact: Susan Bardack – 518.867.7940/This email address is being protected from spambots. You need JavaScript enabled to view it.