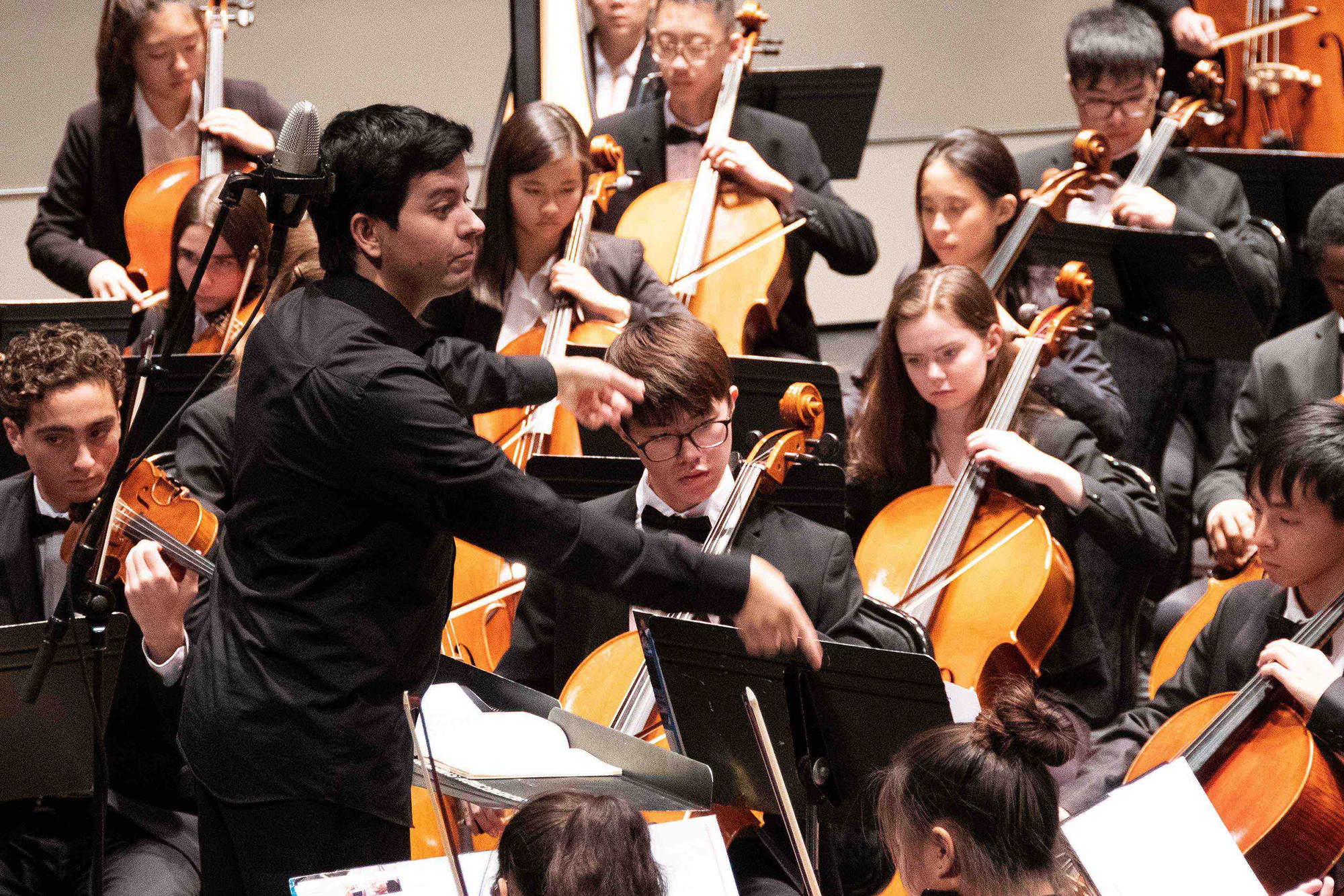 (Troy, NY) – The ESYO “Symphony Orchestra” will present a vibrant concert on Sunday, April 14, 2019 at Troy Savings Bank Music Hall. This concert will include Lois Lyman Concerto Competition winner William Han who will perform Cello Concerto No. 1 by Dmitri Shostakovich.

The musical program includes: Three Dances by M. Camargo Guarnieri, Cello Concerto No. 1, Op. 107 by Dmitri Shotokovich and the Symphony No. 4, Op. 36 by Pyotr Ilyich Tchaikovsky.

ESYO Music Director and Conductor Carlos Ágreda explained that the program is centered around the concept of the “sense of community” as a way to overcome difficulties. He explained that even though Brazilian composer M. Camargo Guarnieri composed the dances independently, they were inspired by a similar idea of celebrations, carnivals and street parties in Brazilian cities. They are a representation of the feeling of collective celebration.

At the time that Tchaikovsky started composing Symphony No. 4, he was going through a stage of depression, melancholy, emotional pain and resignation.  “This is the first time he used a theme of ‘fate’ in his symphonies, with parts of this piece portraying ‘the fatal power which prevents one from attaining the goal of happiness.’ However, as he kept composing the symphony he began to think that no matter how sad you are on the inside you can always find happiness through other people. For example, like at popular festivities or street celebrations. This is why the last movement of this Symphony illustrates a party of popular tunes where he even uses a very well-known Russian song as a compositional resource. His program notes end with the words, ‘Rejoice in the happiness of others and you can still live,’” said Ágreda.

Each year the organization holds an audition where members of ESYO Symphony Orchestra can perform a concerto, from memory, for a panel of judges. Named after a music teacher and one of ESYO’s founding members, the Lois Lyman Concerto Competition has showcased some of the area’s finest musicians since 1985.

Ágreda is also excited for the audience to hear Lois Lyman Concerto Competition Winner William Han perform on cello. He explained that the Shostakovich Cello Concerto No. 1 is one of the most technically challenging pieces in classical cello solo repertoire.

Han, who is now 16 years old and a student at Shenendehowa High School, began to play cello in the first grade while he and his family lived in Taiwan. At his school the conductor decided which instruments the students would play and they suggested the cello because he had larger hands. After moving to the United States he began to perform in ESYO in 7th grade. “I decided to enter this competition because it was like a test or checkpoint to me. I liked getting suggestions from the judges and knowing what I had to work on. I choose this piece because I had listened to it before and was attracted to it. The intensiveness just caught my ears,” said Han.

His parents Timothy Han and Chia Li Lin are very proud of their son because he accepts challenges and never gives up. They explained that he spent many hours preparing for the competition and listened to famous cellists performing the piece as a tool. They hope in the future that William’s music playing will comfort his audiences.

The second place winner, also a cellist, will perform the Saint-Saens Cello Concerto No. 1 with the ESYO Repertory and String Orchestras at their concert on May, 4, 2019 at 3:00pm at the Zankel Music Center at Skidmore College.  Trey Coughlin is 14 years old and is a student at Lisha Kill Middle School.

Coughlin began playing the cello in 4th grade because he loved the instrument’s warm rich tone. Just a few years later, in 6th grade, he was excited to be accepted into ESYO’s String Orchestra. He continued to practice and is currently in the Symphony Orchestra.

“I decided to enter the concerto competition because I saw it as an opportunity to work towards something really big. Never before had I worked towards an audition over such a long period of time, so it was cool to devote so many lessons and practices to one big goal,” Coughlin said.

One of his teachers played the piece for him during a lesson and he loved the way it sounded. “The solo part is so diverse when it comes to feeling, and the orchestra part makes it even better. Sometimes when I listen to the concerto, it reminds me of a storm with patches of light spread throughout it,” said Coughlin.

Both of his parents, Thea and Terry Coughlin, are very excited about this opportunity. “There are many things we are proud of when it comes to Trey, but specific to the concerto competition, we are most proud of how he dedicated himself every single day to his practice and preparation, without any prodding from us whatsoever. This was a goal he set for himself, and he took full ownership of doing what was needed to give his very best performance at his audition, so that he could be personally proud of himself. It was really amazing to witness how self-driven he was through this process,” said Terry Coughlin.

Ágreda has now been working with ESYO for nearly an entire season and is really enjoying his work. “It has been very moving to see how the orchestra has grown so much musically, not only around their collective understanding of symphonic music and ensemble playing, but also how they have developed their passion for music and sense of friendship with each other,” he said.

Music Director Carlos Ágreda will lead a pre-concert presentation and discussion in the concert hall from 2:00pm-2:30pm, with the concert starting at 3:00pm.

Tickets are pay-what-you-can through ACCESS ESYO with a suggested ticket price of $20 per seat. Tickets are available for purchase online through the Troy Savings Bank Music Hall Box Office and at the door.

This concert is sponsored by Albany Med.